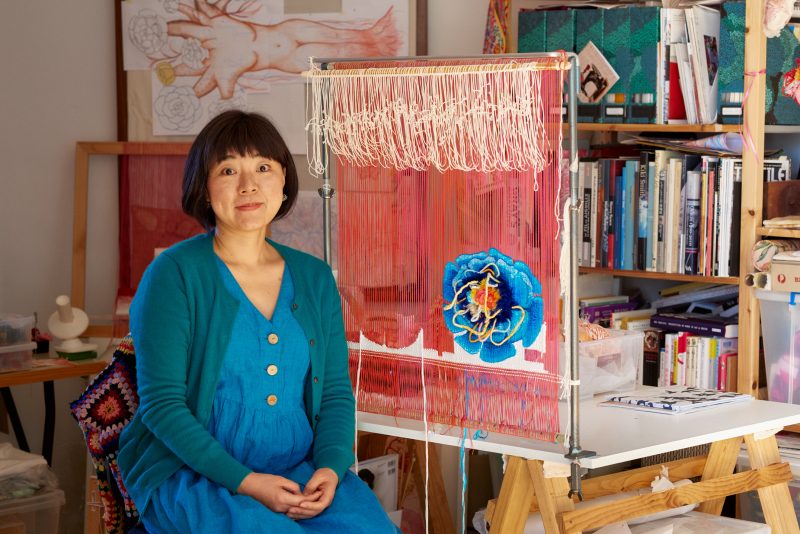 Ema Shin is a Melbourne based artist who was born and grew up in Niigata Japan. She studied traditional and contemporary Japanese printmaking in Tokyo and completed a Master of Fine Art Degree in Nagoya. She has held numerous solo and group exhibitions in Japan, Korea, Australia and numerous other countries. Ema works with several different techniques and mediums such as Japanese woodblock printing, papier-mâché, embroidery, tapestry weaving, book making, Urauchi (chine-colle) and college.

From 2005 to 2007 Ema participated in an Artist-in-residency programs and community projects in Japan, Mexico, Spain and Kenya. Ema first came to Australia in 2010 on an Overseas Research Grant from the Pola Art Foundation, Japan after which she based her art practice in Melbourne. In 2012 Ema was an invited artist-in-residence at Australian Tapestry Workshop during which time she started to include tapestry weaving in her multi disciplinary practice. This resulted in being awarded the first prize at the Kate Derum Awards for Small Tapestries in 2017.
Shin aims to create compositions that express sensitivity for tactile materials, the contemporary application of historical techniques, physical awareness, femininity and sexuality to celebrate women’s lives and bodies.

Listen to Ema’s interview on ABC The Art Show.  Please visit her website for the latest events.